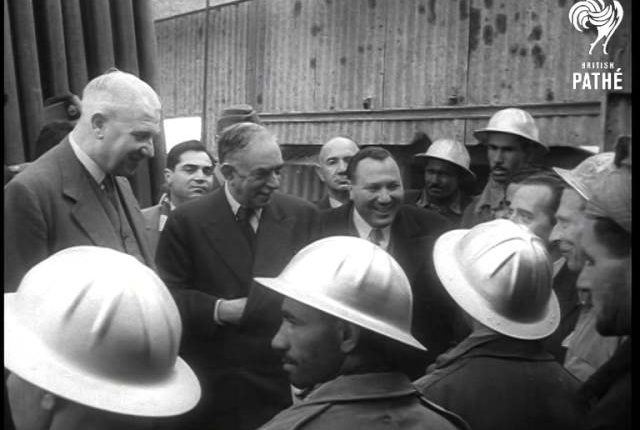 LV. Interior Mr. Gibson speaking at inauguration luncheon held in No. 4. shed at the depot. SCU. Mr. Gibson speaking. Also there is the American Ambassador, Ed S Crocker, and Jamil Bey Al Madfa’ie. Guests applauding. The Prime Minister of Iraq, Nuri Pasha el-Said gets to his feet to speak.

Various shots of the rig working. Shots of men working on rig. CU cutter being raised out of hole. New lengths are added to the drill. (Good shots of a desert oil well at work, longer sequence than in issue version.)

LV of oil pipeline stretching across desert from Zubair in Iraq. CU pipe. Shots of the docks at the port of Fao on the Persian Gulf. CU pipes. LV French oil tanker the ‘President Mary’ at Quay. Various shots of storage tanks for oil. More pipes.